Following a recent workshop held by Worldsteel in Brussels earlier this month on carbon costing we are pleased to bring you their recent report for the steel industry to help understand better the diversity of future policy options in carbon costing and their possible implications.  Expert speakers expressing a diversity of views on the topic had been invited.

What is carbon costing? The philosophy behind carbon costing is that applying a cost to carbon dioxide will encourage emitters to reduce their emissions by being more efficient or by changing their processes. You can apply a cost to carbon directly by, for example, introducing a carbon tax or establishing an emissions trading scheme or, indirectly by, for example, establishing fuel standards. In the steel industry where carbon dioxide emissions are related to the process, where no alternative currently exists and where possible efficiency improvements are limited, this typically introduces an additional cost of production. 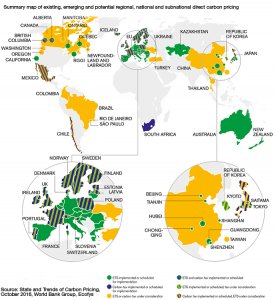 So, what is likely to happen in the years to come? From what we can observe there is a great interest from many countries to use carbon costing mechanisms as one of the many tools to achieve their national determined contributions under the Paris agreement. However, these are likely to be as diverse as the pledges themselves and there is a risk that inequities introduced by carbon costing mechanisms could jeopardise fair competition. This is particularly true for an internationally traded material like steel. How countries deal with this increasingly uneven playing field will be crucial; linking such diverse systems will not be easy and border adjustments could lead to serious trade implications.

The workshop touched on all these important aspects but the discussion has only started and the industry will follow closely any future development.

This blog was first published by Worldsteel.

Department of Commerce Section 232 Hearing 24 May 2017 We are pleased to bring you the following news from The American Institute of International Steel. AIIS has secured an opportunity to…