The World Steel Association (WSA) released statistics yesterday showing steel production accelerated in January. But what does this tell us about demand, and ultimately, prices?

Read our analysis below to better understand these figures and get a balanced, independent outlook for the steel market.

The revival in global steel consumption that began in the second half of last year continues to gather speed, though the January gains recorded here are somewhat inflated by a terrible start to 2016. 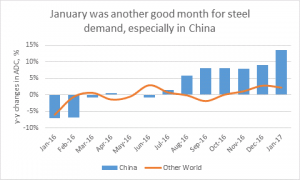 The particularly large gains in China are also partly misleading, in that they reflect a surge in stock building, not only among re-sellers in China, which is greater even than normal at this time of year, but also among mills. 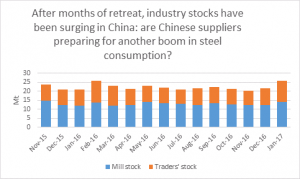 At the same time, the rest of the world’s muted growth, of just over 2% year-on-year, shows that demand in January was still well below demand at the same time in 2015, the worst year for steel producers since the GFC.

How does this affect the price outlook?

Bullish view:
The bulls in Metal Bulletin Research see the restocking within China, which has been accelerating so far in February, as long overdue and are supported by the fact that prices are rising amid the restocking phase, which is also apparent in iron ore.

Bearish view:
The bears, who tend to associate rising stocks with falling prices, based on a reasonable history prior to last year, see the current stockbuild as a sign that a crash in prices is imminent.

Metal Bulletin Research view:
What we know for sure is that if the Chinese can continue to concentrate on their own reviving demand, then prices in the rest of the world are bound to take care of themselves.

We’ll know better what to expect in China next month: a large inventory fall will be a sign that underlying demand is as good as suppliers currently hope but a further build, an increasing bearish sign that suppliers have been far too optimistic.

More detailed analysis and price forecasts by product and month are available from the Steel Forecaster, a weekly service from Metal Bulletin Research

Following their recent AGM on 2nd February 2017 ISTA are pleased to announce the re-election of Tony Singer as President who will take up the post for another year.  Tony Singer…