Nigel puts his best foot forward for the Pituitary Foundation

PS Consultant Nigel Johnson has every reason to feel proud as he managed to complete the Edinburgh Marathon earlier this summer, whilst raising money for the Pituitary Foundation, despite it not going to plan!

Having started training at the beginning of January Nigel was on track until early April.

A week after completing an 18 mile run, pain struck in his right foot, he was told it was Plantar fasciitis and that there is no cure other than rest.

Feeling confident he could complete the marathon after 2 months rest, he stood at the start line with his brother-in-law Michael Baker.

He ran the first 9 miles okay until plantar fasciitis returned on his right foot and although he managed to run/walk the next 9 miles his foot became too painful to take the pounding so he frustratingly walked the last 8.2 miles.

Although this resulted in his slowest marathon yet at 5 hours and 54 minutes, on the plus side he got a lovely suntan!

Nigel said ‘Due to my tracker not working, my family had no idea where I was, so sadly nobody saw me finish – they were in the lost & found tent trying to find me!’

Nigel is still determined to run a marathon in under 4 hours and is planning the next one once he is cured of the plantar fasciitis; however he still raised a commendable £486.20. 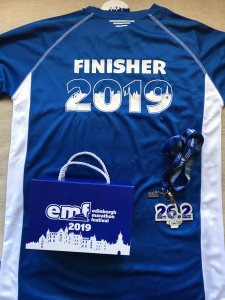 Hearing Dogs Improving Lives for Deaf People Across the UK