On Friday 4th August, Metalogic’s John Padbury headed off on an adventure,  along with a few friends he spent this particular week of annual leave running The Pennine Way!

Steeped in history, this National Trail chases along the mountain tops along the rugged backbone of England and offers 268 miles of the finest upland walking in England. Starting in Edale and finishing on 11th August in Yetholm, in the Scottish Borders, this is a common challenge for walkers, but these guys were running it!

Running over 8 days with distances between 27 to 36 miles per day and climbing along ‘The Spine Of Britain’ the team had a mother and son support crew to keep them fed, watered and safe along their way.

But it wasn’t just for fun(?!) the team were also hoping to raise a few bob to support Cancer Research UK.

Cancer is happening right now and effects so many, friends, family and loved ones… Knowing folks have given their support certainly helped John and his merry group through those tired moments, when they started to wonder to themselves  “Why are we doing this ?”

The group saw some pretty inclement weather…heavy rain, winds and sleet at times, plenty of mud and boggy puddles too!

John Padbury  ‘Just to provide a little update, we got pretty damn close to completing the trail but had to stop on day eight due to safety. Injury had hit my running buddies and I would be running the last day, 28 to 30 miles over the Cheviots, on my own without any reliable communication, no access to the support crew due to terrain and bad weather had closed in.  It was a tough decision but definitely the right one. It’s been an amazing experience and I’m so grateful that I could be part of it, personally covering 227 miles from Edale to Byrness in 7 days.  I’ll be back to finish it off!

John continued ‘I just wanted to say a big THANK YOU for the donations supporting our little run along the Pennine Way and raising a few bob along the way.  The donations were a great support and help when the stages got tough, thank you so much. We have raised over £2,000 for Cancer Research and the figure is still rising.’

If you would like to add your support to this wonderful fundraising effort you can donate through JustGiving.*

*Simple, fast and totally secure your details are safe with JustGiving – they’ll never sell them on or send unwanted emails. Once you donate, they’ll send your money directly to the charity. So it’s the most efficient way to donate – saving time and cutting costs for the charity. 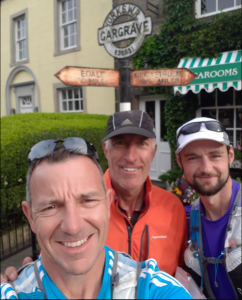 Metalogic have recently introduced their own team recognition initiative. The Metalogic Friday Big Up ensures that everyone’s hard work and contributions really are valued and make Metalogic the success that…